One of the questions that really intrigue me in life is: why do people behave the way they behave? This is an important question because behaviour is one of the key factors that separates one individual from another. So, what is it that influences human behaviour? Is your behaviour actually in your control?

Some people say that how a person thinks is what that influences how s/he behaves, as if thinking is not a part of behaviour. Thinking is a central part of our behaviour. Everything that you do, either physical or mental, is your behaviour.

People say you have complete control over what you are doing (your behaviour), because it is ‘you’ who is consciously chosing to do these things. Therefore, it only makes true that who you are today is who you chose to be within the circumstances that happened to you.

In this view, we are always told inspirational stories of people like Mahatma Gandhi or Albert Einstein, and we are told that they became who they are because they chose to be so. But, let’s turn the tables and dig this a bit.

Probably, any person who was born in place of M. K. Gandhi with his exact genes and the same environmental experience would’ve behaved in the same way as Gandhi did on that night when he faced racial discrimination in a train in South Africa. This is because it is the genes and the accumulated life experience (until that moment) of Gandhi is what that caused a certain reaction in Gandhi’s mind that night.

So, essentially what I am saying is: what you are doing at this moment is nothing but a causal effect of all the experience in your life until the previous moment. Therefore, in essence you really don’t control your life. You just have an illusory experience that you control it. So, in effect, you are not who you chose to be. You are what you are because that is the only way you could have been, given the previous state of condition.

If this is true, it somehow takes away the responsibility of one’s action. In this case, it takes away the credibility of M. K. Gandhi for his efforts because the actions are not consciously chosen by Gandhi, but are the only way things would’ve unfolded that night. 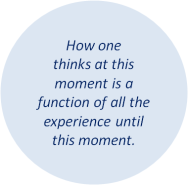 This brings me to the below question, which I call as the birth swap puzzle because it talks about swapping the birth of people. The question is as follows:

If I was born in place of a person X in his or her mother’s womb, carrying the same genome as that of the person X, and faced the same experience* as that person X did in every nanosecond in life, then will I become the same person as that person X is today?

(*experience includes not only the high level things like school, location, etc., but the same atomic arrangements, mixture of position of all atomic and sub-atomic particles around, cell mutations, etc.)

The most intriguing thing about this question is that if the answer is ‘yes’, then it somehow makes all of us equal and it proves that there is no free will. It proves that at our core, we are all the same, but the reason for the difference in our identities lies in the genome and the environmental experience, neither of which is directly in our control. Scientists call this as the problem of nature (genes) vs.  Nurture (environment).

In theory, there are three factors that differentiate one person from another.

What we are essentially saying is that the third factor is nothing but an outcome of the first two factors in a preceding time. This theory is called Determinism and it says that there is a deterministic way in which the laws of nature work, and it applies to human behaviour too. Nothing escapes the laws  of Physics.

Neurologists say that even though we consciously explain why we choose, in reality the choices are made by biochemical processes that we have no control over. So, there is no real free will; it is just an illusion.

For Charles Darwin, determinism came out as a gradual outcome from his Darwinian theory of evolution. Darwin wrote about determinism and free will in his book ‘The Descent of Man’. He says that people only feel that they have free will; ultimately all of their choices and decisions are determined solely on the basis of their genes, past experiences, and their current circumstances.

As neuroscience is starting to understand more about our brain and how we make our choices, there is increasingly more and more evidence on this regard. Some neuroscientists and psychologists say the below:

Consciousness is presented to us as a result of our neurons, our brains, our senses. When we lose these, we lose consciousness. These systems are governed and controlled by neurochemicals, hormones, ionisation, impulses: in short, by biochemistry. Biochemistry is in turn merely a type of chemistry, and when we look at the molecules and atoms that make up our chemistry, they obey the laws of physics.
Balls bouncing around a pool table have no free will. The basic chemicals that make up our bodies and minds have no free will. Neurones fire when they should fire, according to their electrochemical properties. They don’t randomly fire: They fire when they’re stimulated to fire by other neurones or by environmental inputs. Stimulation results from a constant biochemical cycle. These natural cycles determine our states of mind and our choices. Through a long and complicated series of cause and effect, our choices are made. As such, all our ‘choices’ are ultimately the result of impersonal and mechanical forces. There is no “free will force” that causes neurones to fire some times and not at others. They fire in accordance with the rules of physics, firmly beyond our control but not beyond our appreciation. These facts are proclaimed also by none other than the foremost physicist Albert Einstein.
There is now exceedingly strong proof in neuroscience that we make our decisions much before we are conscious  of them.

Some of the famous determinists include Charles Darwin, Arthur Schopenhauer, Albert Einstein, Richard Dawkins, Stephen Hawking, Spinoza, Ayn Rand, David Hume, and many others. Below are some quotes on determinism.

“We like to forget that in fact everything in our life is chance, from our genesis out of the encounter of spermatozoon and egg onward.” – Sigmund Freud

“Everything is determined, the beginning as well as the end, by forces over which we have no control. It is determined for the insect as well as the star. Human beings, vegetables, or cosmic dust, we all dance to a mysterious tune, intoned in the distance by an invisible piper.” – Albert Einstein

“Everything in nature is the result of fixed laws.” –Charles Darwin

Determinism says that you are nothing but a bunch of atoms obeying the laws of nature. The exact truth and future of the theory of determinism can only be understood with greater understanding of quantum physics and neuroscience, because the argument of a determinist at the core is that everything has a causal effect on something else.

I’ve stumbled on this thought after long hours of enquiry and observation of human behaviour, esp. about how people are apathetic towards human suffering, how people feel superior to others, and how people identify themselves with their achievements and failures. Therefore, in the light of this article, I plead that let us be a little more tolerant to our fellow living beings and let us always try to understand their actions a little more deeply.

I have used the honorable Mahatma Gandhi in an example in the above post purely for the purpose of making it easy to understand through a popular example, and it doesn’t hint any form of derogation even to the smallest degree. I hold high respect for Mahatma Gandhi and his contributions. Please don’t construe the example beyond the scope of this article.