Designed by Piero Gatti, Cesare Paolini, and Franco Teodoro and produced by the Italian company Zanotta in 1969, beanbags have become a globally recognized piece of furniture. Today, the global bean bag market is estimated to be around 100 million USD and is expected to reach 1 billion USD in its market size by 2026. 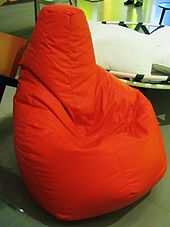 The original design by Piero Gatti was called “Sacco”, which was a pear-shaped leather bag filled with styrofoam beans and is still in production today. The product which started originally as a pear-shaped design today is sold in thousands of shapes, fabrics, and colors.  Some of the common shapes available in the market today are shown in the below grid.

Some of the major players across the world are Ace Bayou Corp, Fatboy USA, Comfy Sack, King Beany,  Yogibo, Ultimate Sack, MUJI and ORKA India. Bean bags have become a common trend in offices in the 21st-century working world. A good bean bag should be lightweight, comfortable, skin-friendly, non-sweat-inducing, stylish and show your character. Bean bags can be made from materials including leather, suede, and corduroy.

The white beans that we commonly see in bean bags are nothing but expandable polystyrene. The raw beads as shown in the left are procured as a raw-material from petrochemical companies and these beads are then heated using a steamer to form the expanded beans that we know.

A video of expanded beans (just after steam heating):

A video showing how printing is done on synthetic leather of a bean bag:

Hope this gave a good introduction to how bean bags are made across the world.

One thought on “Beans and Bean-bags: Manufacturing and Marketing”