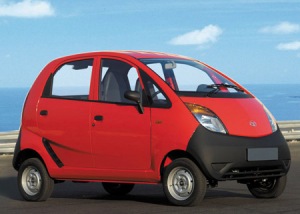 The second car of the Urban

The Tata Nano  may well turn out to be the second car of the Urban Consumer. Working couples who own a single car, face difficulty to commute to different offices daily as the husband drops his wife and then goes to his office. These people will not mind to own a Tata Nano as their second car because they have already established their status symbol with a more reliable first car.

Activities of eve-teasing and Ram-Sena activities have beaten women into  insecurity. So young girls in college, and women may contemplate to buy a more secure personal transport even at thrice the price of a two-wheeler. Also, a car is much safer than a scooter. Rich Dad will be happy as he spends less money on his son’s or daughter’s car. Though this is not a big market, students  in urban cities are a potential niche segment.

First time buyers are more cautious and look at a car as a long term investment. For most of the Urban population, buying a car is not a problem, but maintaining a car is a problem. So, they will never buy a Tata Nano against much better cars, especially when there are good models in the 3 lakh segment like the Maruti Alto. Most of my friends say they will buy a Maruti against a Nano.

As already said, Tata Nano may well be the second car of the Urban but I doubt if it can make a dent to the first time buyer’s segment in Urban areas. Most of the people in India will be first time buyers for whom a car is a status symbol, a symbol of their progress into the rich community. They wouldn’t like to buy a car branded as Aam Aadmi’s Car, because they don’t like to see themselves as an Aam Aadmi anymore.

Rural and lower middle-class in India

Rural markets constitute around 8 percent of the Maruti’s overall domestic sales. With the urban markets looking for luxury cars, the rural market is the segment where Nano completely fits in and its competitive price is just what the doctor ordered. Efficient distribution channels, and providing financial support through bank loans are some of the key initiatives where the automobile giants concentrate on to tap the Indian rural markets.

With Maruti’s strong presence in the rural markets, things may not be easy for the Tatas and Hyundais. With Tata’s water filter ‘Swach’ entering the rural market, if it can create trust in the brand ‘Tata’ then it brings the rural consumer closer to Tata Nano. The Tata Group seems to have a double strategy addressing the ‘Bottom of the pyramid’ market.

Autorickshaws and Taxis  – A simple ‘No’

There is no disagreement that Tata Nano with its fiber body, 624 cc, and small space cannot play the role of a taxi and is simply not the vehicle for the highways.  But Nano replacing the Autorickshaws is debatable. I spoke to a few auto-drivers around in Hyderabad and they seem to be excited at Nano but not without some concerns.

– Nano cannot move into slum areas as easily as an Autorickshaw.

– Mileage is an issue for the auto-driver.

– Cost of repair and maintenance

– Return on Investment doesn’t seem to be promising.

Tata Motors is looking forward to launch in South Africa, Kenya, Uganda, Nepal and other markets with weak public transport system. “Tata Motors will make the Nano available in Nigeria in the next one year to one and a half years,” a senior official of Tata Africa Nigeria, Sudeep Ray, said.

Will this ‘Nano’ revolution last long?

Tata Nano is a revolution in car making, and buying a car will never be the same again. The question is: How long?

5 thoughts on “Tata Nano and its market”